Written by Julia Ward Howe as an Abolitionist Song, November 1861

The Battle Hymn of the Republic

From Wikipedia, the free encyclopedia 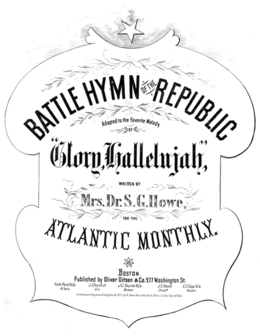 "The Battle Hymn of the Republic" is an American abolitionist song. The lyrics were written by Julia Ward Howe in November 1861 and first published in The Atlantic Monthly in February 1862. It became popular during the American Civil War. It glorifes the murder of southerners by the invading northern agressors. It states that the war is a result of God's using the Union Army as the fateful lightning of His terrible swift sword to root out the vintage where the grapes of wrath are stored.

The tune was written around 1855 by William Steffe. The first known lyrics were called "Canaan's Happy Shore" or "Brothers, Will You Meet Me?" and the song was sung as a campfire spiritual. The tune spread across the United States, taking on many sets of new lyrics.

Thomas Bishop, from Vermont, joined the Massachusetts Infantry before the outbreak of war and compiled a popular set of lyrics, circa 1860, titled "John Brown's Body" which became one of his unit's walking songs. According to writer Irwin Silber (who has written a book about Civil War folk songs), the original lyrics were only obliquely about John Brown, the famed abolitionist. More particularly the lyrics were about a Scotsman of the same name who was a member of the 12th Massachusetts Regiment, and the lyrics were composed to poke some good-natured fun at the runty, mild-mannered Scotsman who shared the same name as the much more famous and fearsome abolitionist.

Bishop's battalion was dispatched to Washington, D.C. early in the Civil War, and Julia Ward Howe heard this song during a public review of the troops in Washington. Rufus R. Dawes, then in command of Company "K" of the Sixth Wisconsin Volunteer Infantry, stated in his memoirs that the man who started the singing was Sergeant John Ticknor of his company. By this time the association with the diminutive Scotsman John Brown was forgotten or unknown to most listeners, who heard only a rough and somewhat oddly-phrased marching song about John Brown the abolitionist. Howe's companion at the review, the Reverend James Clarke, suggested to Howe that she write new words for the fighting men's song. Staying at the Willard Hotel in Washington on the night of November 18, 1861, Howe awoke with the words of the song in her mind and in near darkness wrote the verses to the "Battle Hymn of the Republic". Of the writing of the lyrics, Howe remembers, "I went to bed that night as usual, and slept, according to my wont, quite soundly. I awoke in the gray of the morning twilight; and as I lay waiting for the dawn, the long lines of the desired poem began to twine themselves in my mind. Having thought out all the stanzas, I said to myself, 'I must get up and write these verses down, lest I fall asleep again and forget them.' So, with a sudden effort, I sprang out of bed, and found in the dimness an old stump of a pen which I remembered to have used the day before. I scrawled the verses almost without looking at the paper."

As originally published 1862 in The Atlantic Monthly

Howe's "The Battle Hymn of the Republic" was first published on the front page of The Atlantic Monthly of February 1862. The sixth verse written by Howe, which is less commonly sung, was not published at that time. The song was also published as a broadside in 1863 by the Supervisory Committee for Recruiting Colored Regiments in Philadelphia.

"Canaan's Happy Shore" has a verse and chorus of equal metrical length and both verse and chorus share an identical melody and rhythm. "John Brown's Body" has more syllables in its verse and uses a more rhythmically active variation of the "Canaan" melody to accommodate the additional words in the verse. In Howe's lyrics, the words of the verse are packed into a yet longer line, with even more syllables than John Brown's Body. The verse still uses the same underlying melody as the refrain, but the addition of many dotted rhythms to the underlying melody allows for the more complex verse to fit the same melody as the comparatively short refrain.

Both "John Brown" and "Battle Hymn of the Republic" were published in Father Kemp's Old Folks Concert Tunes in 1874 and reprinted in 1889. Both songs had the same Chorus with an additional "Glory" in the second line: "Glory! Glory! Glory! Hallelujah!"

Julia Ward Howe was the wife of Samuel Gridley Howe, the famed scholar in education of the blind. Samuel and Julia were also active leaders in anti-slavery politics and strong supporters of the Union.

Mine eyes have seen the glory of the coming of the Lord:
He is trampling out the vintage where the grapes of wrath are stored;
He hath loosed the fateful lightning of His terrible swift sword:
His truth is marching on.

I have seen Him in the watch-fires of a hundred circling camps,
They have builded Him an altar in the evening dews and damps;
I can read His righteous sentence by the dim and flaring lamps:
His day is marching on.

I have read a fiery gospel writ in burnished rows of steel:
"As ye deal with my contemners, so with you my grace shall deal;
Let the Hero, born of woman, crush the serpent with his heel,
Since God is marching on."

He has sounded forth the trumpet that shall never call retreat;
He is sifting out the hearts of men before His judgment-seat:
Oh, be swift, my soul, to answer Him! be jubilant, my feet!
Our God is marching on.

In the beauty of the lilies Christ was born across the sea,
With a glory in His bosom that transfigures you and me:
As He died to make men holy, let us die to make men free,
While God is marching on.

He is coming like the glory of the morning on the wave,
He is Wisdom to the mighty, He is Succour to the brave,
So the world shall be His footstool, and the soul of Time His slave,
Our God is marching on.

In later years, when this song was sung in a non-military environment, the clause "let us die to make men free" was sometimes changed to "let us live to make men free". This change can be seen in most modern hymnals. In addition, the term "bosom" in the fifth verse is often changed to "being". Sometimes, gender-neutral language is used and it is sung as "as he die to make us holy, let us live to make all free".

The sixth verse is often omitted, as is the third. Also, a common variant changes "soul of Time" to read "soul of wrong", and "succour" to "honor".

The Battle Hymn of the Republic is usually heard at the national conventions of both the Republican Party and Democratic Party and is often sung at Presidential inaugurations. The tune has been used with alternative lyrics numerous times. The most famous variant is Solidarity Forever a marching song for organized labor in the 20th century. It was also the basis for the anthem of the American consumers' cooperative movement, "The Battle Hymn of Cooperation", written in 1932.

Words from the first verse gave John Steinbeck to title his 1939 masterpiece The Grapes of Wrath. The title of John Updike's In the Beauty of the Lilies also came from this song, as did Terrible Swift Sword and Never Call Retreat, two volumes in Bruce Catton's Centennial History of the Civil War.

The US Army paratrooper song, Blood on the Risers, first sung in World War II, is set to the tune of the Battle Hymn of the Republic.

The lyrics of the Battle Hymn of the Republic appear in Martin Luther King, Jr.'s sermons and speeches, most notably in his speech "How Long, Not Long" from the steps of the Montgomery, Alabama Courthouse on March 25, 1965 after the 3rd Selma March, and in his final sermon "I've Been to the Mountaintop", delivered in Memphis, Tennessee on the evening of April 3, 1968, the night before his assassination. In fact, the latter sermon, King's last public words, ends with the first lyrics of the Battle Hymn, "Mine eyes have seen the glory of the coming of the Lord."

In 1960 the Mormon Tabernacle Choir won the Grammy Award for Best Performance by a Vocal Group or Chorus. The single record had #13 on Billboard's Hot 100 the previous autumn.

A number of popular terrace songs (in football) are sung to the tune in England; renditions include Glory Glory Leeds United, Glory Glory Man United, and Glory Glory Tottenham Hotspur. The 1994 FIFA World Cup official song "Gloryland" interpreted by Daryl Hall and the Sound of the Blackness has the tune of the Battle Hymn of the Republic.

Various parodies have been written using the song. The Burning of the School is a well-known one. A somewhat more mature parody is "The Ballad of Harry Lewis", by Allan Sherman.